Every industry has its heroes throughout time, and locksmithing has its fair share as well. In this article, we will take a look at some of the most famous locksmiths of all time – followed by the reasons for which this fame is noted.

We begin with Robert Barron – a locksmith who patented the double acting tumble locker. This was done in 1778, and was one of the first major improvements in lock security since the first example of the pin lock was noted. It’s completely revolutionised the way that the industry would develop, and Mr Barron can take some credit for the current state of the locksmith industry.

It was James Sargent who was responsible for creating the first lock which was able to be customised as needed to create a new keys and codes to let people in.

In other words, these locks were programmable to the users desires, and were therefore able to accommodate a change in key without having to purchase a whole new locking device. Amazingly, this change came about in 1857, and by 1873, the United States government was readily using these types of devices in their buildings.

Another invention made by this person was the time lock mechanism, by which a safe – namely a bank vault – would unlock only at specific times during the day. This was a major step forward in that design for high-tech and sophisticated locking mechanisms. 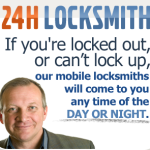